Posted on September 1, 2010 by njcaausabaseball 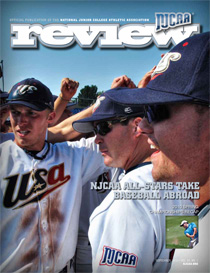 The September Issue of the NJCAA Review (official publication of the National Junior College Athletic Association) has the NJCAA Baseball All-Star Team on the cover as well as a nice two-page spread on the team. You can access the online version of the issue via NJCAA homepage at www.njcaa.org (click on the magazine cover).

Unfortunately, the article in the magazine had to be cut short due to layout issues. Thus, several quotes from the coaching staff had to be taken out. However, we thought it would be a great idea to share those….

This was a great experience for all involved. I want to thank the NJCAA National Office and Baseball Coaches Association for putting a great trip together. It was a pleasure to be able to put the USA uniform on and represent the country and the NJCAA in international competition. It was a tremendous honor and experience that none of us will ever forget.
– Jeff Willis, NJCAA USA All-Stars Head Coach

To be a part of this NJCAA All-Star Team and represent your country in a prestigious international tournament on foreign ground was very much a privilege and an honor. The people of Netherlands were unbelievable. They were as grateful for us being there as we felt to be there ourselves. The atmosphere at the stadium for every game played was impressive – no matter what team was playing.
– Marc Rardin, NJCAA USA All-Stars Assistant Coach

I had always heard that competing with the “USA” across your chest was very special. But to do it for the association that I have been a part of 27 years made it much more so. Standing on the foul line hearing the United States anthem in a foreign land standing across from a foreign team is something I’ll never forget.
– John Stratton, NJCAA USA All-Stars Assistant Coach

It was an honor to represent the USA and the NJCAA at the Honkbal Tournament. I’m sure every player on our team was grateful for the opportunity to participate in such a fun and exciting environment, and that they will carry memories of this trip with them for many years in the future.
– Dave Grant, President NJCAA Baseball Coaches Association

The opportunity to play on this team was tremendous. I learned a lot by playing against the best from around the world as well as playing with the best guys from the NJCAA. It was an experience of a lifetime and one I will never forget.
– Tyler Hall, NJCAA USA All-Stars Player (SS/2B)